Dinah, the Daughter of Jacob, felt bored—and she had good reason to be. Life in a goatskin tent did not offer much attraction for a girl in her teens, especially since her parents were aged and she had only brothers with whom to talk. Dinah had not had much of a chance to relax. Her life had been nomadic, constantly on the move. Originally migrating from the city of Harran in Mesopotamia—about four hundred miles to the northeast—her family continued to wander. Again and again after her family halted for a while, the tent pins would be taken out of the ground and on they would go. They would be on the move once more, moving step by step to keep pace with the animals.

The Lure of the City

Then they arrived in Canaan. Dinah’s father pitched their tents near Shalem, which belonged to the city of Shechem, and bought a piece of land. Apparently he wanted to settle in the land God had promised to his forefathers Abraham and Isaac, for through the promise the land was also his.

It was remarkable, however, that Jacob did not travel several more miles to Bethel. There he had made a promise to God some twenty years earlier, shortly before he moved out of Canaan. Had his love for God cooled off?

Shechem was situated in the strategic pass that cut through the Ebal, Ephraim, and Gerizim Mountains, and it controlled the roads to the north and the west. Boasting a beautiful location and advanced culture, Shechem was never dull. Daily, the merchants and migrants who traveled from the East to Egypt passed through the city in exotic dress.

Dinah was bored of being alone. She was restless. She longed for something happier, brighter than the tents of her father. She wanted to meet other girls and had heard that the girls of Shechem offered a colorful picture because of their beautiful Eastern clothes. Desiring to see these costumes for herself, she left the parental tent and began walking toward Shechem.

Why did no one prevent Dinah from leaving? Why did no one warn her? Hadn’t her mother or father pointed out the possible dangers threatening her? In the past, Great-grandmother Sarah and Grandmother Rebekah had found themselves in great trouble when they had drawn much attention from kings of the lands they visited. Only an intervention by God and the presence of their husbands had kept them from disaster. But Dinah was alone, young, and inexperienced. In this culture, daughters were under the strict supervision of their parents. Her father should have been a protection over her life, but he was absent from her story until after she wandered into danger. Was his lack of engagement and wisdom in guiding his daughter a possible sign of his cooled relationship with God?

A Chain Reaction of Misery

So she arrived at Shechem. How many, if any, of the local beauties she saw is unknown. But she did end up in the bedroom of the prince of the land. Prince Shechem, the son of Hamor, saw her, took her, and raped her.

Her little trip, launched in curiosity and impulse, set off a chain reaction of misery that ended with crime and mourning. The comfortable relationship that Jacob and his family had with the heathen land unleashed a sorrow so great that it could not be reversed after it was set in motion.

While Dinah remained in the royal palace with Shechem, Jacob and his sons heard what had happened. King Hamor, Shechem’s father, anticipated Jacob’s response and visited him. “My son has his heart set on your daughter,” he said. “Please give her to him as his wife.”

Then Shechem himself arrived. He had horribly violated Dinah, and perhaps he and his father had come to the conclusion that she should become his wife to keep peace with Jacob and his family. Regardless, he asked Jacob to give Dinah to him to legitimize his actions. “Let me find favor in your eyes, and I will give you whatever you ask,” he told Jacob. “Make the price for the bride and the gift I am to bring as great as you like, and I’ll pay whatever you ask me. Only give me the young woman as my wife.” It was clear that Shechem felt very attached to Dinah. He loved her and talked tenderly to her. And she? Scripture does not give her a voice. Was she terrified? Had she, knowing that the violation meant no other man would marry her, pushed away thoughts of the rape and clung to the hope for a marriage to Shechem?

In order to please Dinah’s family as much as possible, Hamor suggested that Jacob and his tribe make a covenant with the people of Shechem so that they could intermarry and do business together. But Simeon and Levi, Dinah’s brothers, were furious. Under their existing law, the loss of a girl’s virginity was considered a flagrant crime. They were too shocked and angry to overlook the insult, for it was an outrage against all of them. “You can’t do such a thing!” they raged.

Their fury was justified, but the way they took their revenge was not. Just as Jacob’s lack of relational closeness to God had left Dinah open to being preyed upon, his lack of guiding wisdom in the lives of his sons meant they turned to sinful reasoning and action rather than the ways of God. Rather than acting honestly, Simeon and Levi moved hypocritically. Pretending to agree with King Hamor’s proposal to merge the two groups of people, they set forth the condition that every male inhabitant of Shechem would have to undergo circumcision, the ritual that was obligatory for the Hebrew men. Their request revealed how superficially the two brothers thought about religion. They mistook its true meaning for its outward sign. And, what was far worse, they used religion to cover up premeditated murder.

After Hamor and Shechem convinced their subjects of the reasonableness of the Hebrews’ request, the ceremony took place. Simeon and Levi then entered the city on the third day armed with swords. While the entire male population was in pain, unable to move because of their wounds, Simeon and Levi killed every man in the city. With their swords, they beheaded or stabbed man after man. They didn’t hesitate even to slaughter Hamor and Shechem, men with whom they had pretended to discuss the covenant only a few days before. What began with lack of relationship with God ended up becoming murder.

Simeon and Levi’s gruesome murder of unsuspecting people wasn’t even enough to cool their hatred. They also plundered the city, seizing all the flocks and herds and capturing the women and children as their prey.

The sons of Jacob had met one heinous crime with another. Simeon and Levi had become murderers, abhorred by the world. They had cast a blame upon themselves that could never be removed. Countless men died because of their cruelty; wives and children became widows and modeless orphans who could call sorrow their only personal possession.

“You have made me stink among all the people of this land,” Jacob lamented to Simeon and Levi. “We are so few that they will come and crush us, and we will all be killed.”

It was in fact God’s name—so closely connected with Jacob’s name and the names of His people—that really suffered. Jacob neglected to mention this. Was it possible that he was more concerned with his own name, the talk that went on behind his back, than with the honor of God? Again we see signs that the weakness and distance from God on the part of the father led to the misfortune of his daughter and the sin of his sons.

Jacob’s attitude toward his family was not impressive either. He rebuked Simeon and Levi for the way they had brought disgrace to him, but he did not mention their sin against God and their fellow humans. The Bible doesn’t even mention Jacob’s fatherly concern and authority concerning Dinah. She didn’t receive the attention from him that she needed before, during, or after this painful situation. Jacob was thinking only about himself. 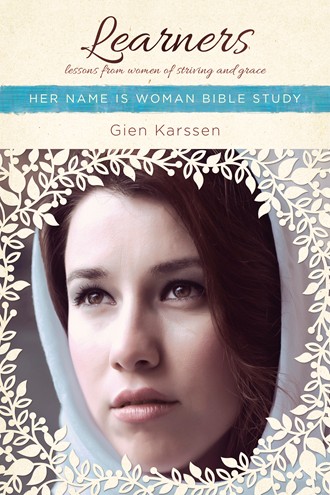 Whether or not Dinah’s mother understood and comforted her is not recorded. Yet who else but Leah—who had suffered so much herself—could have been more understanding of her daughter’s pain? The scars from Dinah’s emotional wounds may never have healed completely.

After these sad events, on God’s command Jacob moved his family away from the site of the crime to Bethel. There Jacob once again became the man he ought to have been earlier, a father who led his family in the service of God. But Dinah’s story remains a tragic reminder that distance from God can lead to tragedy not only in our own lives but in the lives of those we love.

You’ve been reading an excerpt from Learners: Lessons from Women of Striving and Grace, part of the HER NAME IS WOMAN BIBLE STUDY, by Gien Karssen. In the study, Karssen explores the stories of Dinah, Leah, Sarah, and nine other women of the Bible. Wherever God led them, they walked through periods of growth and event trials, and they also experienced His faithfulness and love. Available from navpress.com.

Latest Articles:
This Reveals the Beauty of God’s Life Giving Power
Will We Eat and be Satisfied?
Enduring Tough COVIDtimes (Joyfully?)